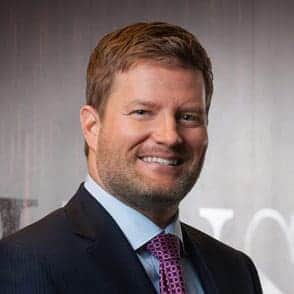 Christopher Elliott is the managing attorney over the Mass Torts Department at Bachus & Schanker, LLC. Chris’s passion started when he pursued Law rather than Business. His first interaction with Bachus & Schanker, LLC was as a legal intern, when he provided pro-bono services through the Trial Lawyers Care Program in 2002. He helped represent first responders injured in the line of duty during the 9/11 attacks in New York. Chris worked on a case involving a firefighter, who sustained career-ending injuries that prevented him from supporting his family. He worked diligently with Bachus & Schanker, LLC’s legal team to win a multimillion-dollar settlement for the victim and his family. Chris and the team stay in touch with the client, whose New York City firefighter helmet is proudly displayed in the firm’s Wynkoop office.

After graduating from Oklahoma City University School of Law in 2004, Chris worked as an Assistant State Attorney for the 20th Judicial Circuit in Naples, FL. As a prosecutor, Mr. Elliott was lead counsel on a number of cases taken to trial. His experience prosecuting DUI cases has led to his dedication in helping victims of Drunk Driving obtain compensation for their injuries.

In 2009, he formally joined Bachus & Schanker, LLC as an attorney. While he finds every case and every story to be different, his goal remains the same: to even the playing field for his clients so that justice can be served. By 2013, Chris has been named equity partner. Today, Mr. Elliott spends his time litigating both personal injury and mass tort pharmaceutical and medical device cases.

While all cases are important to Chris, some have become personal victories. In November 2013, a woman approached him in great need of representation for her 15-year-old son who suffered injuries due to a poorly assembled zip line. The boy’s mother was in desperate need of covering medical expenses as the at fault party’s insurance company’s compensation was nowhere near what was needed. Chris knew the insurance company was not being forthright in compensating the young man’s injuries and decided to help. He ended up winning the case, and the young man and his family found closure and moved on with their lives.

In 2014, the Denver Business Journal selected Chris as one of the Top 40 under 40 professionals for his business success and community contributions. He received similar recognition being named Top 100 Trial Lawyers from the National Trial Lawyers Association. Additionally, the American Society of Legal Advocates named Chris as one of its “top 100 litigation lawyers” in Colorado.

Chris serves on the Bachus & Schanker, LLC Cares Foundation board, and donates his time and funds to support groups like Mothers Against Drunk Driving, Dolls for Daughters and many other organizations the foundation supports.