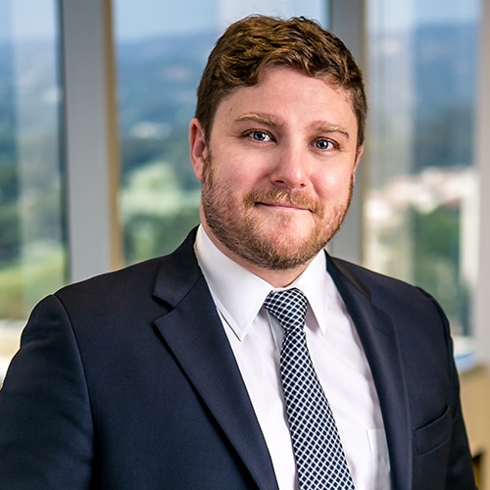 R. Brent Wisner is an attorney and senior shareholder in the San Francisco Bay Area office of Baum Hedlund Aristei & Goldman. Brent is driven by a deep-rooted passion for using the law to help those who have been marginalized and hurt by large, and sometimes malicious, corporations. Brent has dedicated his practice to vindicating his client’s rights and holding wrongdoers accountable. He concentrates his practice on pharmaceutical class action litigation, toxic-tort injuries, and consumer fraud litigation. In 2022, Brent was selected to become an Associate Fellow of the Litigation Counsel of America (LCA) trial lawyer honorary society. LCA Fellows are selected after being evaluated for effectiveness and accomplishment in litigation, trial work, and ethical reputation.

Brent is one of Baum Hedlund’s lead trial attorneys and manages a highly-trained team of attorneys on all aspects of the cases in his department. He takes pride in personally working up all facets of litigation—from briefing, expert discovery, through trial and, if needed, appeal. After obtaining two landmark verdicts against Monsanto, he has been showered with major awards and recognition. He is the youngest attorney in U.S. history to win a multi-billion-dollar jury verdict. Brent has achieved multiple verdicts totaling $2.427 billion, and negotiated mass tort settlements in excess of $1 billion.

Law360 named Mr. Wisner a “Titan of the Plaintiffs Bar” for, in part, his role as co-lead counsel in a complex trial that resulted in the first multi-million-dollar jury verdict against a brand-name drug-maker, GSK, holding it liable for injuries caused by a generic version of the drug Paxil. The case has been described as groundbreaking and likely to shape the landscape of pharmaceutical litigation for years to come. Also, because of this cutting-edge verdict, The National Law Journal recognized Brent and the firm as 2018 Elite Trial Lawyers and the first place winner in the category of Pharmaceutical Litigation.

One of the Leading Zantac Lawyers in the Country

In 2019, Brent and his colleagues filed lawsuits against the manufacturers of Zantac (ranitidine) alleging the popular heartburn medication contains a cancer-causing chemical (NDMA) at levels over 3,000 times greater than the FDA’s legal limit. The lawsuits were among the first of what will likely be many thousands. “Based on recent scientific findings, the levels of NDMA in Zantac are staggering,” says Wisner. “Considering how many people took Zantac in the U.S. since 1983, we are staring into the face of a public health crisis, and these defendants—in particular GSK and Pfizer—are to blame.”

The judge overseeing the multidistrict litigation (MDL No. 2924, where all of the cases filed in federal courts are consolidated) appointed Brent to the Practices and Procedures Team to help establish the protocols and methodology for litigating tens of thousands of cases in the years to come.

Brent also serves as Co-lead Plaintiffs’ Liaison Counsel for the Ranitidine Product Cases, also known as the Ranitidine (Zantac) Judicial Council Coordinated Proceedings (JCCP 5150), California Superior Court for the County of Alameda. He is also Co-Chair of the Zantac Litigation Group for AAJ – American Association for Justice. Brent has appeared on television and legal news concerning Zantac lawsuits and delivered numerous presentations at legal conferences, such as MTMP, AAJ, HarrisMartin and CAALA regarding Zantac.

Brent Wisner served on all the trial teams for the first three Monsanto Roundup trials. He served as co-lead trial counsel in two of the first three cases, delivering the opening and closing arguments, and cross-examining many of Monsanto’s corporate witnesses.

The juries in the first three trials found that exposure to Monsanto’s Roundup weed killer caused the plaintiffs to develop non-Hodgkin lymphoma, awarding more than $2.424 billion in total damages.

Brent also holds a judge-appointed leadership role as administrator and co-lead counsel for the Roundup Judicial Council Coordination Proceedings (JCCP), which consists of hundreds of Roundup cases consolidated before the California Superior Court for the County of Alameda (state court). He also serves as Liaison Counsel to the Federal MDL-2741 (multi-district litigation) In Re: Roundup Products Liability Litigation for Roundup JCCP 4953 Alameda County.

Featured in the New York Times – Attorneys Brent Wisner and Michael Baum in Brussels with clients John Barton and Teri McCall before important EU glyphosate vote, bringing a face to the Roundup lawsuits and to focus on the Monsanto Papers.

Following the groundbreaking verdicts in the Monsanto trials, Brent has been honored with numerous awards and accolades in recognition of his skill in the courtroom:

In 2021, Brent was awarded “West Trailblazer” by The American Lawyer, and MTMP awarded him with the esteemed “Clarence Darrow Award.” He was also a finalist for “Attorney of the Year” by Consumer Attorneys of California.

Prior to working at Baum Hedlund, Brent served as a Law Clerk for the Honorable Helen Gillmor in the U.S. District Court for the District of Hawaii for two years. While clerking, he worked on several jury trials, both criminal and civil, and was responsible for aiding the Court in resolving complex pretrial and post-trial motions. In addition, he worked on several cases in other jurisdictions, including the District of Arizona and the Eastern District of California. While clerking, Brent also gained valuable appellate court experience when Judge Gillmor sat on the United States Court of Appeals for the Ninth Circuit in Pasadena, California.

Brent received his law degree (J.D.) and a Master of Public Policy (M.P.P.) from Georgetown University prior to his clerkship. While at Georgetown on a scholarship, he was recognized for his commitment to public interest law and received a pro bono service award for completing over 750 hours of volunteer legal work.

During law school, Brent was heavily involved with the Georgetown Law Trial Advocacy Program, where he was one of the most successful mock trial advocates in the history of the school. Some accolades Brent received at various national competitions included “Top Advocate” at the National Ethics Trial Convention — a competition he also won — and “Most Exceptional Advocate” at the National White-Collar Crime Invitational. Because of Brent’s success with mock trial, he volunteered as a coach and instructor of the team and served as the Managing Director of the Trial Advocacy Program during his third year of law school. In addition to his pro bono work and participation in mock trial, Brent also served as the Executive Editor of the Georgetown Public Policy Review—a peer-reviewed publication focusing on important issues in law and public policy.

"They've gone up against big-name companies while advocating for plaintiffs...in some of the biggest and most well-known cases of the past year. They've strategically shaped outcomes, acted as champions to their clients and nabbed massive settlements. And they perform with passion." - Titan of the Plaintiffs Bar: Baum Hedlund's R. Brent Wisner Read the Article

Brent also volunteered as a legal intern, during law school, at the Institute on Religion and Public Policy, where he drafted testimony, affidavits, and declarations for legal proceedings that related to human rights. He even wrote a resolution on the imprisonment of Sigma Huda, an outspoken Bangladeshi critic of human trafficking, which passed in the U.S. House of Representatives. During his first summer at law school, Brent worked for the U.S. Attorney’s Office in Los Angeles, within the Civil Fraud Division. It was there that Brent first discovered an interest and passion in whistleblower law. In his second summer of law school, he worked as a Summer Associate at Paul Hastings in the Los Angeles office.

Prior to starting law and graduate school, Brent participated in the prestigious Coro Fellowship. As a Coro Fellow, Brent worked on a variety of important projects with labor unions, local and national government, Fortune 100 companies, and non-profit organizations. It was a formative experience for Brent where he developed a unique insight into how, through the law, one could genuinely improve society.

Brent is an outspoken and passionate UCLA Bruin. He received his undergraduate degree, with honors, in Philosophy and Political Science from the University of California, Los Angeles in 2005. At UCLA, Brent was heavily involved with the UCLA Sailing team, serving as a Captain for two years. In addition, Brent was a Captain on the UCLA Mock Trial Team, which during his last two years won back-to-back National Championships. Brent was also personally recognized as an “All-American Attorney” by the American Mock Trial Association.

University of California, Los Angeles, 2005 (Bachelor of Arts in Philosophy and Political Science)

The District of Columbia Court of Appeals, 2021

Selected as an Associate Fellow of the Litigation Counsel of America, 2022

The National Trial Lawyers Top 40 Under 40

The Round Table: America’s Most Influential Trial Lawyers, Trial Lawyer Magazine and The National Law Journal

Briefing before Parliament of Canada’s Green Party of Canada about the $289M Monsanto Roundup cancer verdict and the Monsanto Papers at Parliament Hill, Ottawa, January 30, 2019

Briefing in Brussels- Attorney Wisner, his law partner, Michael Baum, and two clients, Teri McCall and John Barton, traveled to Brussels by invitation to meet with and brief EU press, lawmakers from Germany and France, and staffers for various Members of European Parliaments (MEPs). They arrived just days before a hearing organized by EU environmental and agricultural committees to discuss their firm’s release of the Monsanto Papers and allegations that Monsanto unduly influenced studies on glyphosate, the active ingredient in Roundup. They warned officials about the cancer risk associated with glyphosate and Roundup. Attorneys Wisner and Baum also sent a letter to EU officials requesting they conduct an official inquiry into Monsanto’s manipulation of science and potential collusion with regulators. Belgium, October 4-5, 2017

Published the Monsanto Papers - During the Monsanto Roundup cancer litigation, Brent, his partner, Michael Baum, and their team, declassified and published internal documents known as the Monsanto Papers, revealing Monsanto’s scientific manipulation to hide the truth about Roundup’s harmful effects. This evidence and the successful plaintiffs verdicts have changed how the world questions the safety of Roundup, resulting in regulatory changes, restrictions and bans of glyphosate across the globe. August 1, 2017 through December 2019

Georgetown University recognized Brent for his commitment to public interest law and received a pro bono service award for completing over 750 hours of volunteer legal work.