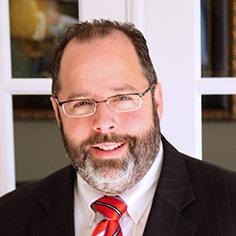 Steve has been practicing for over 20 years. During part of his career he served as a magistrate for the local Court system, where he presided over more than fourteen thousand hearings. He is a true student of the law and a lawyer’s lawyer — that is, other lawyers often seek him out for mentoring and advice.

Steve was born in Fairmont, West Virginia, the third of five children. Steve’s father was a former coal miner turned Army soldier, and as a result Steve spent the first 9 years of his life moving from one Army base to another, all around the country. Steve’s family finally settled in Jacksonville, Florida, on his 10th birthday, September 6, 1976, shortly after his father’s retirement from the Army.

Steve graduated from Terry Parker High School in 1984, where he made life-long friends, one of whom is now one of our of-counsel lawyers, Mark Link. After high school, Steve attended University of Florida, where he graduated with a degree in Classical Studies (and with a 3.7 GPA in his major)! Pretty smart, huh? In 1988, realizing that a degree in classical studies wasn’t gong to get him very far (after all, what do you do with the ability to speak and/or read the dead languages of Latin and Ancient Greek?), Steve went to law school, completing his first year at University of Mississippi, and transferring to University of Florida College of Law, for his last two years, where he graduated with Honors, and where he served as the Editor of the Journal of Law and Public Policy. It’s true . . . Steve’s just a bit of a geek!

During the time Steve was in high school, college, and law school, he was always working: he worked at a sandwich shop and at the Regency Branch Public Library; he cleaned carpets; he worked at a computer lab (at a time when you actually had to go to a lab to use a computer!); he cleaned rental houses (including scrapping soap scum off of bathroom tiles . . . there’s got to be a lawyer joke in there somewhere!); and he worked stocking and sweeping floors at a small grocery/convenience store across the street from the law school (although he usually ate his way through his wages by the time pay day came around).

Steve married his wife, Deborah Greene (who is also now his law partner) on Valentine’s Day in 1995, at Central Christian Church (Disciples of Christ) in Jacksonville. Steve and Deborah have two children, one in college and one in high school. Just about all of Steve’s time away from the office is spent with his family. But since he works with his wife, his sister, Andrea Jevic, also an attorney at the firm, his mother-in-law, Lynne Bain, a legal assistant at the firm, and his father-in-law, Ralph Greene, one of the firm’s of-counsel lawyers, he’s never far from family, even when he’s at work!

Prior to forming Combs Greene, Steve left private practice and began serving the local Court system as a family law magistrate, where he presided over more than fourteen thousand hearings (and that’s not a typo!) in family law cases, divorce cases, and dependency cases. In 2005, in addition to continuing to perform duties as a magistrate, Steve also served as the general counsel for the local Court system. Steve left the Court system to make an unsuccessful bid for election to a County Court Judge seat, after which he and Deborah joined forces again (they had practiced together prior to Steve working for the Court system).

Steve enjoys studying constitutional law issues and the history of the drafting of and early interpretation of the U.S. Constitution. Like we said, Steve’s just a little bit geeky! But that’s what makes Steve such a great student of the law! Steve and his wife, Deborah, also enjoy reading books, attending movies together, and traveling (both in the United States, and abroad). Steve also loves old television programs, especially the Rockford Files. In fact, when Steve was an adjunct professor for several years at Florida Coastal School of Law, his final exams were usually based upon a hypothetical involving the antics of James Rockford and his ne’er-do-well sidekick, Evelyn “Angel” Martin. Some of his students didn’t even know what the Rockford files was! But the exam hypos were still entertaining!

Steve’s favorite movies are Stripes (and he is often heard quoting lines from this movie), Groundhog Day (which he loves to watch over and over again . . . get it?) and The Shawshank Redemption; his favorite books are Robert Parker’s Spencer series, and The Grapes of Wrath; and his favorite old time radio shows are Fibber McGee and Molly, the Jack Benny show, Suspense, and X Minus One. Given the gamut of Steve’s interests . . . from the history of constitutional law . . . to listening to old time radio shows (and often donning the voices of various characters in those shows) . . . to watching movies like Stripes and Groundhog Day . . . you never know what will happen when you hang out with Steve! But you can be sure: if you’re just hanging out with Steve, you’re going to have fun and laugh a lot; but if there’s a serious issue at hand, you’re going to get analyses and strategies from the mind of an extremely creative, keenly perceptive and intellectual, student of the law. What a great package!

President | Florida Association of Magistrates and Hearing Officers | 2004 to 2006

Florida Family Law Inn of Courts | Master of the Inn