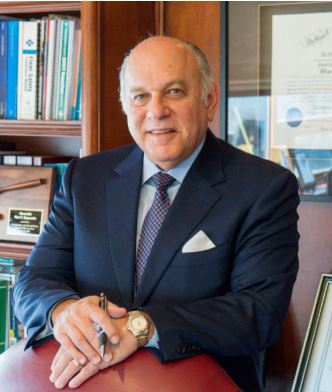 Marc Saperstein, is a founding member of Davis, Saperstein & Salomon, P.C. He is certified by the Supreme Court of New Jersey as a Civil Trial Attorney and has a reputation of handling some of America’s most complex cases including Tobacco Class Actions, Diet Drugs, Fuel Tank explosions, trucking, construction accidents and many other types of litigation. He has been responsible for dozens of seven figure settlements and verdicts. Recently Marc Saperstein was responsible for achieving a jury verdict of $20,000,000 involving a New York construction worker injured on the job.

Marc C. Saperstein Marc Saperstein is a past President of the New Jersey Association for Justice, formerly known as the Association of Trial Lawyers of America-NJ. He has served on its Board of Governors since 1992 and has held every office in the organization, including PAC Trustee, Executive Board Member, and Legislative Chair. He had served as a municipal Prosecutor and a Municipal Court Judge.

Marc Saperstein has the distinction of serving as Chairman of the Products Liability Section of Davis, Saperstein & Salomon, P.C., and Mass Tort Department. As a member of the NJAJ Educational Foundation, he regularly lectures to fellow lawyers on issues pertaining to current case law, ethics, trial evidence, products liability, automobile, trucking, and other trial litigation topics.

He is the Co-Chair and Founder of the widely attended annual CLE approved “Meadowlands Seminar”. He is equally skilled in New York Trial practice and heads the firm’s New York Trial Practice Section.

In the past, Marc Saperstein served on the Louisiana Tobacco Class Action Trial Team which successfully won a $500,000,000 verdict against big tobacco. He also served as NJ/NY Class Counsel for the Fen-Phen Class Action litigation and also represented individual consumers who were injured as a result of taking this drug.

During the past 35+ years, Marc Saperstein has developed an interest in handling cases involving serious burn injuries caused by defective products, product design defects, automobile gas tank explosions, and trucking litigation. Marc Saperstein continues to represent individuals in complex construction and all areas tort litigation including all other types of automobile collisions.

Marc Saperstein received his B.A. in Economics from Rutgers University in New Brunswick and completed his Juris Doctorate at Emory University School of Law in 1978. He is admitted to the Bar of New Jersey, New York (Supreme Court and Appellate) and Georgia. He is also admitted to practice before the Southern and Eastern District Courts of New York, U.S. Court of Appeals, Second, Third and Fifth Circuits and the United States Supreme Court.

Marc Saperstein has been admitted, with the permission of the Court, in several jurisdictions outside of New Jersey for purposes of participating in large complex cases. He has served as Vice Counsel in various complex litigation matters in the states of California, Florida, Louisiana and West Virginia. His legal arguments before the Appellate Divisions and the Supreme Court of both New Jersey and New York resulted in published decisions.